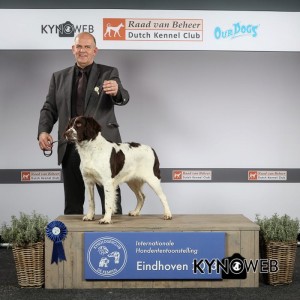 On Saturday 2nd of Februar 2013 there was an int. show in Eindhoven ( NLD) . Our ‘Femke fan ‘t Suydevelt ‘ (picture) became ‘Best female’ and also ‘BOB’! She is 2 years now and also Youth World-Winner etc. Official she could be Dutch champion now, but she is still too young for it. So, 4 months waiting and hope she will win again. I am not afraid for that.
Our ‘Kirsi fan ‘t Suydevelt’ ( 10 months) who won on her first show for 2 weeks the ‘Youth Winster’ -title and also ‘Winster -title’!!! Won also in youth -class again. Still 1 point and she is Dutch Youth Champion too. Exciting!